Roca Editorial is launching a divulgative books series which will include ''Perché ci piace la musica'' (Why We Like Music), by Silvia Bencivelli. The book was originally published in Italy by Alpha Test/Sironi Editore and rights were previously sold in France. 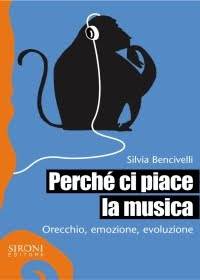 Is it really possible that listening to Mozart will make us and our children smarter? Why is there always some classical music in background, in high class restaurants? Is it true that cows like opera and sharks like Barry White?Darwin thought our ancestors used music to court, and this would have lead to words later. Others reckon music has the same evolutionary role as a delicious cheesecake: just none. But one thing is certainly true: with various effects on our mood, all of us do listen to music.
Then, which are the exact mechanisms by which music gives us pleasure? Science hasn’t answered yet, but there is much going on in laboratories.
From Neanderthal to Metallica, from Pythagoras to neuroscience, this book tells the state of the art in research about our relationship with music, and ends up depicting the birth of a new science.
You can read more about the book (here)
Publicat per SalmaiaLit a 18:54