Marco Tropea (Italy) acquires rights of ¡Calcio!, by Juan Esteban Constaín; To be published in Spain by Seix Barral in 2012.

When, and why, the first football match of History was played? Shortly after WWII Professor Arnaldo Momigliano (a true character who was a Jewsih-Italian scholar exhiled in Oxford escaping from Mussolini) dared to formulate his hypothesis: In 1530, at the Santa Croce square in Florence, the first match in which players could not touch the ball with their hands took place. Everybody in Oxford is shocked at such a statement: Football, like tea time, is an English invention! 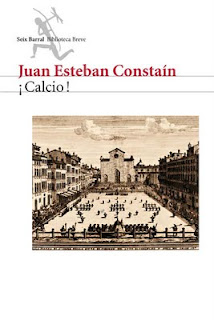 Departing from an anusing and entertaining plot line and an enchanting main character, Juan Esteban Constaín writes a novel that questions the role of Histoy and Historians by providing a story in which facts and fiction mingle to create an atmosphere of credibility. As long as you can provide a coherent and seemingly documented historical account you can manipulate History to your advantage to make people believe that what you are saying is true. And, as Italians say, ‘Se non è vero, è ben trobato’...

This is a novel that wisely combines fact and fiction to recreate what could have been the first football/soccer match (Calcio in Italian), also about the ball games that have made people happy since Ancient times. Told from the investigations and controversies of a group of historians in post World War II, for whom the origins of this sport are a national matter that threatens to resume the conflicts between the old empires.

February of 1530. The army of Charles 5th sieges Florence as a gesture og goodwill towards Pope Clement 7th (a Pope from Florence, a descendant of the Medicis), as two years before the troops of the Spanish Emperor had plundered Rome and made the Pope a prisoner. Now Florence has proclaimed itself a Republic and the Pope’s family has been deprived of power. Emperor Charles’s attempt to restitute the Medicis is, then, a way to make peace with the Pope, and grant his favours.

The city has been under siege for four months and the Emperor and the Pope await for news in Bologna. They have banned almost everything in Florence: water, wine, the Carnivals... But on February 17th the Spanish troops will witness and amazing show: ignoring the prohibition, the whole city has gathered at the Santa Croce square to defy the power and arrogance of the Empire by playing a calcio match. Then, a Spanish soldier suggests their Captain that maybe the could find another way to fight the Florentines: Instead of going on with the useless siege, why don’t they play out a match that settles who will win this war?

Juan Esteban Constaín (Popayán, Colombia, 1979) is a Historian, specialist in Classical Languages and a lecturer at the University of Rosario. He is also a contributor to several Colombian media. El naufragio del imperio was his first work of fiction, and it was shortlisted for the Espartaco Award for Historical Fiction at the Semana Negra de Gijón 2008 (Spain).

With its forthcoming publication in Spain by Seix Barral in 2012, Juan Esteban Constaín will join one of the most prestigious lists of established and young authors writting in Spanish, where readers can find authors such as Ricardo Menéndez Salmón, Isaac Rosa, Enrique Vila-Matas, Eduardo Mendoza, Elena Poniatowska, Antonio Muñoz Molina, Elvira Lindo, Laura Fernández or Rosa Montero.

A few quotes about ¡Calcio!

* “The most recent novel by Juan Esteban Constaín confirms that we are facing a gifted author, with enormous narrative talent. His descriptions of the first football match in History have the flavour of the best Pérez-Reverte. But in his writing we find a deeper literary sense (...) ¡Calcio! manages to entertain and amuse the reader with its unquestionable literary skills” Revista Arcadia

* “It’s a truly divertimento for gentlemen. To me, if not historical, your novel is literarily plausible, and I believe it announces big things fot the future. (...) A splendid fantasy. (...) Because ¡Calcio! is entertaining, witty and funny.” Elmalpensante.com

* “A homage to Football and History, and a funny reflection on the wars historians fight in footnotes” El Espectador

* “In this novel, Juan Esteban Constaín confirms his wit by recreating a delicious fictional universe based on History.” Extroversia