'Alicia en un mundo real' will be published in Greece

Publishing House Anubis, in Greece, has acquired rights of 'Alicia en un mundo real', the graphic novel by Isabel Franc and Susanna Martín (published in Spanish and Catalan by Norma Editorial).
This is a graphic novel in which Alice doesn’t live in Wonderland. She has gone through an exprience that, unfortunately, is real to many women: a breast cancer. 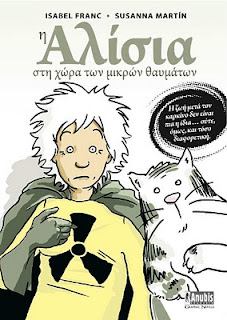 Nevertheless, thanks to her strong and fighting character she has been able to turn an especially dramatic situation into a life experience that helps her to carry on. Her sense of humor has not been taken away by the journey of the disease, the aggressive treatments or the extirpation of a breast.
This is a book about breast cancer written in a non tragic way. It narrates the vicissitudes of a journalist in her late 40s who sees how, all of a sudden, her life will be throughly changed by an unexpected event. The comic puts special emphasis in how Alicia confronts life after such an adverse adventure.
Alicia is a freelance professional, with a successful and hectic life both in the filelds of love and work, she’s always running up and down until one day everything stops during a visit to her gynecologist: the doctor detexts a breast cancer. She will have to undergo surgery and follow a tratment. The doctors say it plain: “you’ll lose a year”.
Alicia en un mundo real portrays, in an autobiographical tone and with traces of irony, the ups and downs that Alicia will live during her fight against cancer and her return to everyday life.
A few weeks ago 'Alicia en un mundo real' was awarded the Jennifer Quiles Award. After its success in Spain it has already been reprinted by Norma Editorial.
Publicat per SalmaiaLit a 13:34