La voz de los muertos, by Julián Sánchez, to be published next May

The new novel by Julián Sánchez, author of 'El anticuario' will be published next May by RocaEditorial. The title is 'La voz de los muertos' (The Voice of the Dead).
Barcelona’s Police inspector David Ossa faces a difficult case: a multiple murder and a suicide that have occured in Las Ramblas, right in the heart of Barcelona. Ossa soon realises that this is an especial case, with aspects that escape common sense and in which nothing is what it seems. His investigations lead him to a case from 1969, still unsolved and almost identical to the one he is trying to solve now. 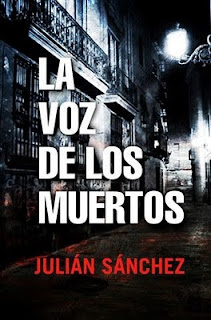 But when his supervisors see that the investigation is not closed quicky, they tell him to close the case and move to another thing, even if many questions would remain unanswered.
Ossa refuses to follow instructions and in his hunt for clues and answers he will enter a dark, mysterious and captivating world of supernatural implications in which his mind will develop an unexpected and dangerous connexion with Death itself.
Even at the cost of loosing his own sanity and with all his colleagues against him, Ossa is determined to follow his investigation to the very last consequences...
Julián Sánchez was born in Barcelona in 1966 and lives in San Sebastián. His debut novel, El anticuario, was very well received and up to now it will be translated in languages such as German (RH/Limes Verlag), Dutch (Uit. Q), Italian (Einaudi Stile Libero), Portuguese/Brazil (Record), Polish (Swiat K.), Greek (Livanis), Russian (AST) or Chinese (Shangai 99).
About El anticuario:
- ‘A compelling novel (...) in many ways superior to The Davinci Code’ Library Journal (USA)
- ‘A lesson of good writing’ La Gazetta del Mezzogiorno (Italy)
- ‘A thriller that stands by the Barcelona of Ruiz Zafón and Falcones’ L’Unione (Italy)
Publicat per SalmaiaLit a 12:36 Cap comentari:

We are happy to announce the deal for Italian translation rights of '56 razones para amarte', by Margarita García Gallardo and published by Viceversa Editorial. The novel will be published in Italy by Emmebi Edizioni.
‘Because of the wind’s passion, because of the shining ice, because of the impossible shaped stones, because of the thunder’s rasping breath...’

There are many reasons for which Ventura, a little man with a big heart, has always been in love with nature. But his daily life passes by in a monotonous and boring way, in a breathless and deceiving Madrid. He takes care of his seriously ill father and is in love with a married woman.

His life will turn over when he starts to suffer hallucinations and sees himself involved on a murder and on a dark plot of ecological corruption. 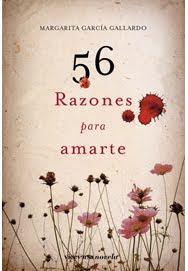 Publicat per SalmaiaLit a 10:18 Cap comentari: