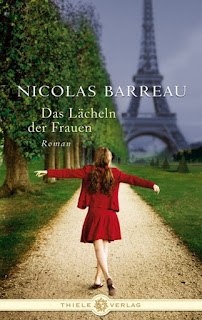 Given this success, we are glad to announce that Feltrinelli has acquired rights of a previous novel by the author, “You'll Find Me at the End of the World” (Du findest mich am Ende der Welt).
But this is not all, as this week we have received an offer from Russia for 'Das Lacheln der Frauen/The Smile of Women'. More info on this soon!
Apart from Italy/Feltrinelli, Das Lacheln der Frauen (originally published in Germany by Thiele Verlag in hardcover and Piper Verlag in paperback) will also be translated by: St. Martin’s Press (English World Rights), Espasa/Planeta Group (Spanish), Quinta Essencia/Leya Group (Portugal), Verus Editora/Record Group (Brazil), Columna (Catalan), The Enthusiast (Bulgarian) and soon Russia (to be announced).
For plot info about Das Lacheln der Frauen/The Smile of Women' click (here).
***
You'll Find Me at the End of the World (Du findest mich am Ende der Welt), by Nicolas Barreau (Thiele V., 2008 / Piper V., 2010), 248 pp.
Jean-Luc is determined to track down the capricious author of the most seductive love letters in the world. He doesn’t know anything about her, except that she has captured his heart
Jean-Luc Champollion owns an Art Gallery in Paris, and is what the French call a ‘homme à femmes’. The charming gallery owner has always been a hit with the ladies and he wants nothing more than to live out his days in the company of beautiful women and his faithful dalmatian, Cézanne. One day he receives a mysterious and delightful love letter. The problem is it doesn’t say who it is from. And Jean-Luc’s life changes course.
Jean-Luc is baffled, but he decides to play along. The writer has given him an email address, so he sends a message, hoping to unmask the identity of the mysterious stranger who seems to know him so well. Searching through his past like a detective, he follows up the clues in the stranger’s letters not realizing that he is beginning to fall in love. The object of his passion exists only in words and in his imagination, but he comes to know this woman better than the pictures in his gallery, even though he has never seen her face. Or has he?
Rights sold to: Feltrinelli (Italy). And previously to: The Netherlands (Uitgeverij Arena) and Czech Republic (Albatros).
(Rights handled on behalf of Thiele Verlag)
Publicat per SalmaiaLit a 9:12 Cap comentari:

'El anticuario' (The Antiques Dealer), by Julián Sánchez and published in Spain by RocaEditorial, will be published in Norway by Pantagruel Forlag. The novel has already been sold to 11 languages!
About El anticuario:
- ‘A compelling novel (...) in many ways superior to The Davinci Code’ Library Journal (USA)
- ‘A lesson of good writing’ La Gazetta del Mezzogiorno (Italy)
- ‘A thriller that stands by the Barcelona of Ruiz Zafón and Falcones’ L’Unione (Italy)
This is a novel about a secret, a murder, a search, a love story and an adventure all over the streets of a mysterious Barcelona. A story of intrigue, suspense and search of the truth.
Playing with past an present, Julián Sánchez has written a fascinating novel of mystery and adventures in which the reader is literally swept away by the plot. The building of the Cathedral of Barcelona, a cold and ambitous killer, the kabbalistic tradition and the many secrets hidden in 15th C. Barcelona’s Jewish quarter will take the reader’s breath away to the very last page.
Rights sold:
German (RH/Limes Verlag), Dutch (Uit. Q), Italian (Einaudi Stile Libero), Portuguese/Brazil (Record), Polish (Swiat K.), Greek (Livanis), Russian (AST), Czech (Jota), Romanian (Allfa), Chinese (Shangai 99) and Norwegian (Pantagruel).
************************
El Anticuario (The Antiques Dealer), by Julián Sánchez - Starred review from Library Journal (USA):
Sánchez prefaces this compelling novel with the assertion that some of the events described are real, which, combined with Sánchez’s fine writing, lends this book a delicious plausibility. Antiquarian Artur Aiguader’s confidential connections enable him to corner the market on superb acquisitions in Barcelona, but now is the time of reckoning. Artur is murdered, but shortly beforehand he had sent a letter to his adopted son, the acclaimed writer Enrique Alonso, directing him to a certain book in the event of his death. Determined to find both the murderer and the secret of the book for which Artur gave his life, Enrique soon finds himself caught up in a race to solve a perilous historical mystery before other forces do.
This latest addition to the Da Vinci Code readalikes is in many ways superior to it. While the ambit here is literary rather than artistic, the theology is far less controversial (kabbalistic rather than Gnostic), and the hint of magic is a delight. Sánchez respects the reader’s intelligence, reveals the necessary bits and plot twists at precisely the right intervals, and maintains perfect pace with multidimensional characters, which he wisely limits in number. Highly recommended for general interest bookstores and public libraries.
—Carolyn Kost, Stevenson Sch. Lib., Pebble Beach, CA 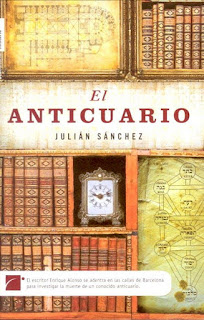 Publicat per SalmaiaLit a 14:30 Cap comentari: 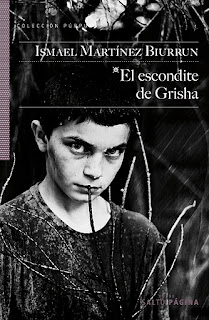