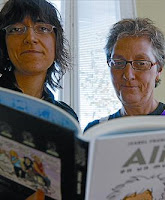 Publicat per SalmaiaLit a 8:44 Cap comentari:

We just come from accepting an offer for Hierba Santa from Suhrkamp/Insel (Germany). Translation rights were recently acquired by Orlando Publishers (The Netherlands) as well. Orlando Publishers is a new imprint of AW Bruna Publishers.
Hierba Santa was published last summer 2009 by Planeta Mexico and, with echoes of Magic Realism, is a vivid homage to Frida Kahlo, a woman who changed the course of modern art. 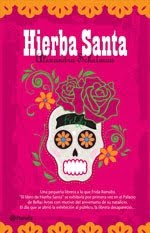 In the novel we are told that all her life Frida kept a little notebook which she called 'The Book of Hierba Santa (Holy Herb)'. In it, she wrote down not only her thoughts and ideas but also many Mexican food receipes that she prepared every 'Día de Muertos' (Day of the Dead), a holiday celebrated in Mexico to pray for and remember friends and family members who have died. Traditions connected with the holiday include preparing the favorite foods and beverages of the departed, and visiting graves with these as gifts.

What's new and different compared to other books about Frida is that the author uses fantasy in the story: The narrator tells us that after Frida's fatal accident in a tram in her early youth (which actually happened) she dies and meets Death. Frida then reaches an agreement with Death which allows her to go back to life: Every 'Día de muertos' she has to pay a tribute to Death by cooking wonderful meals. Given this, all through the novel Frida is very conscious that Death is also part of life. This certainty gives her a special view of the world and the events that take place.

Some of Frida's favourite receipes are included in the novel towards the end of every chapter, so apart from enjoying the narrative and learning more abot Frida's life, readers can also try their culinary skills and pay their own homage to a woman that has become an icon of 20th century art and feminism.

Publicat per SalmaiaLit a 9:56 Cap comentari:

Today we'd like to invite you to watch Mize's Book Trailer. Please do it by clikcing (here)

* “Mizé", by Ricardo Adolfo, has just seen a new edition by Alfaguara/Objectiva. A novel of surprising wit and sarcasm - a perfect portrait of contemporary Portugal.
Francisco José Viegas, Correio da Manhã.
* The entire book is a fast-paced pleasure.
Ingrid Mylo, Germany
* Sublime reading pleasure; a Portuguese who writes books like Almodóvar makes movies! Neon, Germany
Set in the outskirts of Lisbon 'Mizé' is the story of a man who loved the idea of loving a woman, and a woman who loved the idea of being loved by many men. It’s a research on living in an imaginary dimension created by ambitions and wishes, where an ensemble of suburban characters struggles to fulfil their dreams – while struggling with their petty conditions, the daily grind, and bigger aspirations than they could possibly handle.
With a very peculiar point of view, these characters take us into an exploration of double moral standards, ambiguity and into the grey zones that we all operate in. 'Mizé' is a story of fiction versus fiction, where truth doesn’t exist, but lie doesn’t either.
Foreign rights of 'Mizé' have been sold to: Berlin Verlag (Germany) in a pre-empt, Querido (The Netherlands) and Suma – Santillana Group (Spain).
Publicat per SalmaiaLit a 9:29 Cap comentari: 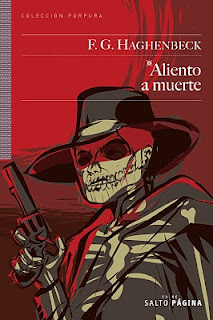 Publicat per SalmaiaLit a 21:43 Cap comentari: