A book about journalism by a brilliant journalist.
8 reprints since March 2011. 25.000 copies sold up to now.
Iñaki Gabilondo is one of the most reputated journalists in Spain. He began his career in a radio station at the age of 21. He has been director of several radio channels and became the TV news director of TVE (Spanish public TV channel network). For 20 years he conducted the main radio show of Spanish Radio History, ‘Hoy por Hoy’, and has spent the last years as the news anchor of TV news programmes at channels Cuatro and CNN+ 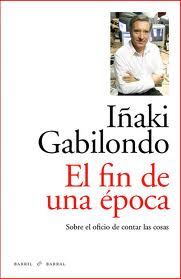 In all these years he has been a privileged spectator and observer of current affairs and he has been telling and explaining it to the audience. El fin de una época is his lucid reflection on a whole professional life in a time in which the future of journalism as we know it is uncertain.
This is a personal text that does not ellude knotty subjects and that not only shows a passion towards journalism but also the fear that such a necessary job would be distorted.
A brilliant book in which Gabilondo analizes the threats and the greatness of a profession to which he has devoted a life and the principles to which each journalist should stick to. The legacy of a model journalist.
El fin de una época (The end of an age).
by Iñaki Gabilondo
Barril & Barral Editores, March 2011 (182pp)