We are happy to share the good news that arrive from Germany about the novel 'Hierba Santa', by F.G. Haghenbeck. 'Hierba Santa' was published in Germany by Insel Verlag last January 2011 and up to now the novel has been reprinted four times. We are glad that German readers are enjoying it!
Foreing rights have already been sold to: Simon & Schuster/Atria (World English), Suhrkamp/Insel (Germany), Orlando Publishers/Bruna (The Netherlands), Planeta Brasil (Brazil), Shangai 99 (China), Rizzoli (Italy).
The translator into english will be Cuban author Achy Obejas, who also translated -to much acclaim- Junot Díaz's 'The Brief Wondrous Life of Oscar Wao' (winner of the Pulitzer in 2008).
Hierba Santa, with echoes of Magic Realism, is a vivid and tender homage to Frida Khalo, a woman who changed the course of modern art and has become an icon for many people all over the world.
Below please see a plot summary in English.
*****
Hierba Santa, by F.G. Haghenbeck 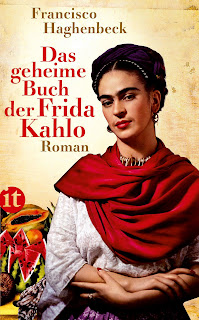 A little handwritten notebook that Frida Khalo called ‘The Book of the Holy Herb’ was to be exhibited at the Palace of Fine Arts on occasion of the 100th anniversary of her birth. The notebook disappeared on the same day that the exhibition was opened...
After a severe accident in the crash of a bus and a trolley car, and after she died for the first time, Frida Khalo reaches an agreement with her Benefactress (the Death herself): Frida will be allowed to live, but, in exchange, every year she will have to prepare an offering to the Dead as a rememberance of this agreement.
Since then, Frida writes down every receipe that she prepares for the ‘Día de Muertos’ (The Day of the Dead). This is a holiday celebrated in Mexico, which focuses on gatherings of family and friends to pray for and remember friends and family members who have died. The celebration occurs on November 1st and 2nd. Traditions include building private altars honoring the deceased, using sugar skulls, marigolds, and the favorite foods and beverages of the departed, and visiting graves with these as gifts.
The receipes are gathered toghether by Frida in her beloved notebook. While year after year the ritual is repeated, Frida’s life goes on impetuously, full of rapture and pain. She meets Diego Rivera, the man whom she will marry and share her life with; but who is also the man who will mark the beginning of her second death. She lives the Mexican Revolution and the socialist upraise, a life behind the fame of her husband.
Frida loves and desires madly, but she lives on borrowed time; her aching and ruined body constantly reminds her that her Benefactress is taking away bits of her soul day after day, and that their final encounter is becoming closer.
Publicat per SalmaiaLit a 14:18