We are happy that Columna Edicions has acquired Catalan Language rights of ‘DAS LÄCHELN DER FRAUEN’ (The Smile of Women), by Nicolas Barreau. To be published in 2012.
The novel is successfully published in Germany by Thiele Verlag (hardcover) and Piper Verlag (paperback)
“The story that I would like to tell begins with a smile. It ends in a small
restaurant in Saint-Germain-des-Prés, exactly there where the heart of
Paris beats ...” (from: The Smile of the Women)
More than 25.000 copies have already been sold in Germany. Righst have been previously sold sold to: St. Martin’s Press (English World Rights), Espasa (Spanish), Feltrinelli (Italian), Arena (Dutch) and The Enthusiast (Bulgarian).
A romantic story of confusion between art and cuisine. A light-hearted novel about the wonderful delirium of love. A story told with Parisian charm – too wonderful not to be true. 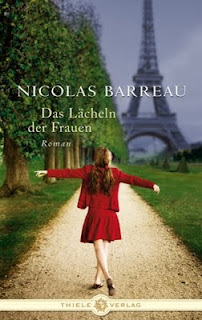 There are no coincidences! Aurélie Bredin, who has taken over her father’s restaurant 'Le Temps des Cerises' after his death, is sure of this truth. On a fateful Friday in November when Aurélie is feeling more depressed than ever before, she discovers a novel in a bookshop entitled 'The Smile of the Women'. Intrigued, she comes across a sentence that refers to her own small restaurant.
After reading the entire story, Aurélie no longer wants to die. Instead, she wishes more than anything to meet the author of the novel because she is convinced that, without even realizing it, he has saved her life. She would like to show her appreciation and invite him to her small, charming restaurant that apparently he is already familiar with. However, her wish proves to be a difficult, almost impossible, endeavour. All attempts to contact the shy English author through his French publishers are blocked by the company’s gruff editor-in-chief, André, who only with great reluctance forwards her enthusiastic letter.
Aurélie refuses to give up, however, and when one day a letter from the reclusive author actually lands in her post box, the encounter that eventually takes place is completely different from what she had ever imagined …
--
Nicolas Barreau (born 1980, Paris) studied romanistic languages and literature at the Sorbonne. He worked in a bookshop on the Rive Gauche in Paris but is far from an inexperienced bookworm. With his two previous and successful novels published by Thiele Publishers The Woman in my Life (2007) and You’ll Find Me at the End of the World, he has gained an enthusiastic audience.
This deal for Catalan language has been made by SalmaiaLit on behalf of Thiele Verlag.
Publicat per SalmaiaLit a 13:07