Editorial Bcklist has acquired Spanish rights of this Hungarian novel, orginally published in 1963.
Backlist will publish it in Spanish in 2011, as Hunagry will be the Invited Guest at the Feria del Libro de Madrid.
The novel was rediscovered in 2004 by the Hungarian publishing house Magveto. In the Spring of 2009 the German translation was released by Rowohlt, and gained a lot of attention in Geermany. Newspapers such as Frankfurter Allgemeine, Frankfurter Rundschau, and Spiegel among others issued rave reviews, calling the the book "one of last century's most exciting love stories", and placing it on a par with Scott Fitzgerald's THE GREAT GATSBY. The author was born in 1927 and recently died in Budapest. 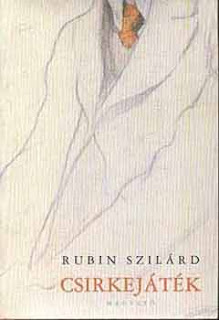 This is the story of Attila and Orsolya, two young lovers in post-World War II Hungary. (The title refers to a game which first-person narrator Attila describes: players are asked to hold out sitting on rails as long as possible despite a train rushing near. His friend remarks that their lives are no different from the game.)
Attila is a poor, aspiring writer, and Orsolya is the descendant of a rich bourgeois German family. Attila felt drawn to Orsolya since they were children, but he dares speak to her for the first time only after she returns after the war from burned down Dresden to her former home town near Budapest, still marked by her recovery from Typhus. Because her family is German, their former riches are all gone. In contrast, Attila seems to emerge as a winner under the new socialist rule – so the two form an unlikely coalition turned upside down. But the obstacles Attila and Orsolya face are strikingly similar to the old days: Orsolya’s family objects to the relationship, and they quite openly point out to Attila that they don’t consider him a good match for Orsolya.
Rights, so far, have been sold to Rowoholt (Germany), Backlist (Spain) and Slovart (Slovakia).
Publicat per SalmaiaLit a 8:34