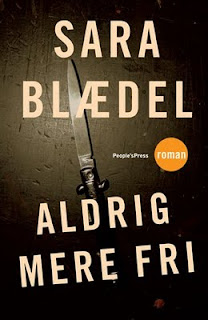 Late one night, a woman is found murdered off a street in Copenhagen’s Vesterbro. The cause of action turns out to be particularly bloody, seeing as someone has slit her throat in an unusually brutal way. Together with a group of colleagues at the Copenhagen Police Department, Louise Rick is quickly digging deep into the case, when her friend, Camilla Lind, phones her up.
Camilla is a crime reporter on a morning paper and wants to find out if there are any new developments in the case, but at the same time she is deeply upset by an event that same morning, her ten year-old son found an abandoned baby on his way to school.  All the traces from the crime scene are pointing towards organised human trafficking from Eastern Europe, and it soon becomes clear to Louise that the perpetrators are a bunch of ruthless gangsters who despise women and won’t hesitate to kill anyone who gets in their way.
* This novel had the largest marketing budget in the history of Danish publishing.
* Number 1 on the Danish Best Seller Lists for several months.
Translation rights Sold to: Germany (Lübbe), Iceland (Upheimar), Sweden (Prisma), Spain (Mosaico/Norma).
Sara Blædel has worked as a journalist for nine years and has been a chief director for several TV shows on Danish Television. She has also written non-fiction debate books and even founded her own publishing house, Sara B, specialising in crime mysteries.  All of her novels published to date focus on Chief Inspector Louise Rick. The successful series has been sold to several countries, icluding Germany, Sweden, Norway, The Netherlands, Hungary and Iceland. Now Spanish readers will be able to meet Louise Rick for the first time...
Sara Bleadel has been voted the Most Popular Author by the public in Denmark. www.sarablaedel.dk
Publicat per SalmaiaLit a 19:50