We are happy that, shortly before Frankfurt, we can announce a new deal: Seix Barral (Planeta Group) has acquired Spanish rights of 'Twist', by Harkaitz Cano. A novel originally published in Basque in 2011 by Editorial Susa, and awarded the Critics Awards. 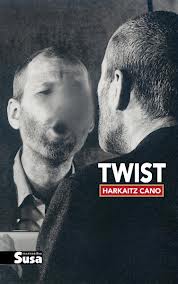 In the 80s, during the hardest years of terrorism in Spain a couple of young Basque friends, Soto and Zeberio, were kidnapped, tortured and killed and their bodies were hidden. Years after that, Diego Lazkano still keeps them in his memory (they were friends) and decides to contact an attorney to open a process in court and try to clear out the facts. The truth is he can’t avoid feeling guilty for what happened to his friends as he has always kept a secret: It was him who, under torture, betrayed them and ultimately caused their disappearance.

Lazkano has tried to get over it and keep on with his life under this feeling of guilt, and has even become a successful writer. But hidden under this cover of normality we find a very different life as the protagonist clings to the broken lives of their friends, and everything that takes place in the present is closesly linked to the past and to this unforgettable secret.

With a complex but effective structure that jumps between the 80s and nowadays, and a plot that surprises and intrigues the reader chapter after chapter, Twist keeps a firm and sweeping narrative voice. A narrative voice that, at some points, craftly uses the second person to directly involve the reader to tell him that making someone vanish completely is in no ones’s reach. This power only belongs to oblivion. And oblivion makes it hard to face the shadows.