Engines on in the US for publication in September 2012: ''The Secret Book of Frida Kahlo'' (originally 'Hierba Santa' in Spanish), by F.G. Haghenbeck. 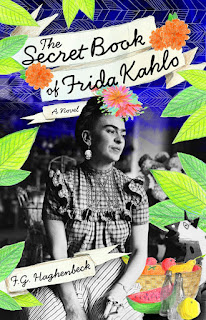 Haghenbeck, F.G.
The Secret Book of Frida Kahlo.
Atria: S. & S. Sept. 2012, (352p.)
Not long ago, a series of notebooks and sketchbooks were unearthed at Casa Azul, Frida Kahlo’s home in Coyoacán, Mexico, and although they were never confirmed as Kahlo’s property, award-winning Mexican author Haghenbeck imagines that, after the ever-ailing Kahlo nearly died, she was given one of them by her lover, Tina Modotti. Kahlo then poured her memories, ideas, and even recipes for The Day of the Dead feasts into its pages, so that we the readers of her book are swirled through her relationships (not only with faithless husband Diego Rivera but with Georgia O’Keeffe, for instance) and the development of her artistic gift.
Meanwhile, folks from Trotsky to Hemingway, Dalí, and Henry Miller drop by. I’m betting on this because Kahlo is relentlessly fascinating, Haghenbeck comes well recommended, and the in-house support is strong."
(Barbara Hoffert, ‘Library Journal’)
See the original post (here)
Originally published by Editorial Planeta Mexicana, 2009
Foreign rights already sold to: Atria Boooks/Simon & Schuster (US), Suhrkamp/Insel (Germany), Orlando Publishers/Bruna (The Netherlands), Planeta Brasil (Brazil), Shangai 99 (China), Éditions de l'Herne (France) , Ivan Rotta & Co. (Finland), Alnari Publishing (Serbia) and Libri Publishing (Hungary) .
Publicat per SalmaiaLit a 13:57