Ediciones Baile del Sol has just acquired translation rights into Spanish of Ricardo Adolfo's novel 'Depois de morrer aconteceram-me muitas cosas'. The novel will be published in 2011.
---
Lots Happened to Me After I Died
by Ricardo Adolfo
Alfaguara Portugal, 2009
* Included in the list of the Best Books published in Portugal in 2009 (Ler Magazine)
“From Amsterdam, where he lives, young Portuguese writer Ricardo Adolfo observes his country with fierce and slashing irony. Only from afar can you see this close. A writer that Portugal needs to discover.”
José Eduardo Agualusa -Winner of the Independent Foreign Fiction Prize 2007
“The new Portuguese literature has to go through here.”
valter hugo mãe - Winner of the José Saramago Literary Award 2007
"If an Author is easily identified by an originality of style, a coherence of inspiration and a capacity to impress, then Ricardo Adolfo is clearly, along with João Tordo, the most notable writer of his generation". Newspaper Sol (Portugal)
Lots Happened to Me After I Died, by Ricardo Adolfo, was selected as the first and leading title in Portuguese language to be published by Alfaguara Portugal, the Portuguese branch of Santillana Group (Spain), launched in September 2009.
*** 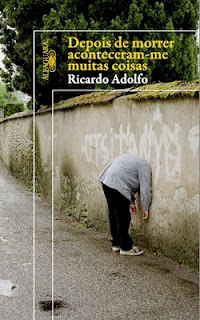 A young couple and their son, recently arrived illegal immigrants in a big city, are left stranded halfway home when their tube train breaks down. It soon becomes clear they don’t know any alternative route home – and nor can they ask for help as they don’t speak a word of the local language.
Confused, they walk through streets carrying their son inside a newly bought suitcase that doubles as a pram. By turns they are chased by two frightened women in hijab, abandoned by a runaway bus driver, robbed by a gang of street kids, and finally end up stealing a spare sleeping bag from a homeless man. The family’s traditional Sunday outing around the shopping streets – streets littered with bankruptcies and boarded-up façades – becomes a 24-hour marathon of revelations and confrontations that could make the couple inseparable, or could tear them apart.
Narrated by the husband, a loner locked inside his own mind, who believes that to make a good decision he has to do just the opposite of what he thinks is right, the novel explores the internal fight of someone forced into seclusion because he is unable to communicate with the world around him.
Combining a fast-paced narrative, quirky dialogues and a strong visual sense with an unflinching social conscience, Lots Happened to Me After I Died exposes the struggle of ‘internal’ immigration – much more overwhelming than any physical displacement.
Ricardo Adolfo is an Angolan-born Portuguese writer. Currently he is based between London and Amsterdam. In 2006 Dom Quixote published his debut novel Mizé. Mizé was very well received in Portugal and has subsequently been translated into Spanish (Suma) under the title of La peluquera de Lisboa, German (Berlin Verlag/Bloomsbury Berlin) and Dutch (Querido).
This year it has been reprinted in Portugal by Alfaguara Portugal.
In 2007 he was creative consultant of the short film There’s Only One Sun, shot by award-winning director Wong Kar-Wai. (See it here)
Lots Happened to Me After I Died is Ricardo’s third book and continues to explore some of the author’s favourite themes, such as the mixture between the banal and the uncanny, and the peaks of tension in the ordinary and mundane.
His writing has been praised for its “…maverick writing, sober and elevated, with an amazingly fine-tuned sense of oral syntax. The dialogue is perfect. Nothing in literature is harder than ‘natural dialogue’…” Fernando Venâncio, writer and critic.
* “Lots happened to me after I died” is a big, enjoyable surprise. Ricardo Adolfo is able to easily pass on those problems that are common to all emigrants: from feeling invisible in the host country, to the uncertainty about the future, the exploitation suffered, the quest for symbols of personal success, etc.
“Diario Digital” (Portugal)
Publicat per SalmaiaLit a 15:40