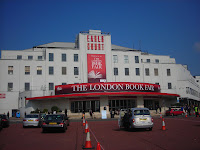 The London Book Fair is over and everybody is already back in their offices. Everybody that I talked to agreed that this has been a very quiet fair and that there have been no surprises or very hot books. In general, everybody has had time to meet their contacts and talk quietly with them without the pressure of being in the middle of an auction.
I was very happy to see many of my contacts and friends, and they all were enthusiastic and thrilled about SalmaiaLit (some of they still have to memorize the name of the agency, but I'm sure it won't take long!).
On Tuesday evening the Spanish ambassador in the UK held a reception at the Spanish Embassy which was attended by many people involved in publishing Spanish books. Important translators such as Nick Caistor or British publishers such as Bill Swainson (Bloomsbury), Daniela De Groote (Arcadia Books), Kirsty Dunseath (Orion Books) or Claire Wachtel (Sceptre) had the opportunity to talk with Spanish publishers and agents and get first hand information about new authors and successful books.
During the fair I met some SalmaiaLit's authors who lived in London, and I was introduced to a new one, Patricia Rodríguez. El Aleph Ediciones will publish her first novel, entitled 19 pulgadas soon. We reached an agreement of representation for foreign rights and now I'm looking forward to reading her novel (which I received inly a day before the fair).
Another novel I'm looking forward to read (in fact I've already read the first 40 pages) is Darling Jim, by Danish author Christian Moerk. SalmaiaLit will represent Spanish rights via Nordin-Loud Agency.
A bestseller in Moerk’s native Denmark, Darling Jim is a gothic tale of suspense drawing on elements from classic mythology. Narrated largely through the diaries of two murdered sisters who became involved with a handsome, beguiling stranger, this tragic love story and riveting thriller unfolds as a local postman reading the diaries attempts to find the mysterious survivor of the fate which claimed the Walsh sisters. The novel has already been published in Danish (Politikens) and it will soon be translated in: USA: Henry Holt & Co (pre-empted in a six-figure deal), Norway: Schibsted, Sweden: Lind & Co (hardcover), Pocketförlaget (paperback) and Earbooks (audio-book), Netherlands: De Geus (after auction), and Germany: Piper Verlag (pre-empted in six-figure deal.
I've got a busy, but surely entertaining, weekend ahead!!
Publicat per SalmaiaLit a 14:59