A couple of weeks ago Nordin-Loud Agency (Sweden) asked SalmaiaLit to represent one of their most successful authors, Liza Marklund, for Spanish languague.

Liza Marklund was born in 1962 and works as a journalist and writer. She lives together with her husband and three children in the South of Spain, where she has recently moved. Her books have been translated into more than 20 languages.
In 2003, her novel ‘The Red Wolf’ was number 12th in the Publishing Trends international best-sellers list.

The novel with which we are beginning is entitled ''Nobel's Last Will'' and it's the sixth novel by the author about journalist Annika Bengtzon. 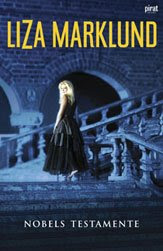 It takes place in Stockholm the last few weeks before Christmas. It starts out with a spectacular attack against the traditional Nobel dinner in the Blue Hall, which is celebrated every evening on the 10th of December. The controversial winner of the Medicine Award, an Israelian scientist is shot and wounded on the dance floor. His partner, the female chairman of the Nobel committee at Karolinska Institut is shot and killed.

Annika Bengtzon is covering the event for her newspaper, Kvällspressen (The Evening Press). But instead of writing the story, she becomes a witness in the police investigation. Her inside perspective takes her far into the work of the police – and the mind of the killer.

It turns out that the solution of the crime is hidden in the will of Alfred Bernhard Nobel, the man who invented dynamite and founded the Nobel awards. But which will? Did he leave only one? That’s a matter of consideration…

Some publishers are already reading it in Spain and we look forward to hearing their final decision about it!
Publicat per SalmaiaLit a 12:12